Permanent magnet technology with high felds and high dynamic properties open up further opportunities for applications in research and development laboratories and across the industry.

The classic problem of creating an approximately uniform magnetic feld, which is widely used in numerous scientifc and technological applications, can be solved with both electromagnetic and permanent magnet (PM) systems. The interesting and practically important question concerns the limitations that exist for feld parameters achievable with permanent magnets. The conventional wisdom is that, frst, the maximal feld of a PM system cannot exceed the residual induction of PM material Br without using soft magnetic concentrators; second, it is possible to generate a magnetic feld with good space uniformity that the quickly changes over time using only an electromagnet. This paper gives a short review of engineering solutions that can considerably extend the realm of a PM systems application. It should be noted that all data given below refers to systems based on commercially available grades of NdFeB. In addition, the typical feld homogeneity in the operating region of all discussed assemblies is ~ 1%. The improvement of homogeneity up to 10-5 is also possible for special applications; however, these methods are beyond the scope of this article.

The dipole Halbach structure [1,2] (Halbach cylinder) has become widely used in recent years. Its principle is shown in Figure 1. 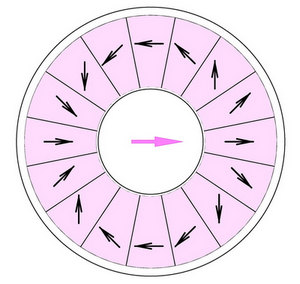 When imagining the ideal structure, in the case an infnite cylinder length and number of sector-shaped elements, the resulting magnetic ﬂux density inside the bore can be calculated from the following analytical equation:

In fact, for any real system, there should be a step-down numerical coeffcient in this formula, which typically proves to be, depending on system geometry, in limits of 0.7 – 0.9. The record high ﬂux density in such a system is ~4 T; [3,4] with further growth of the resulting feld being limited by the coercitivity of the PM material. Yet despite these restrictions, what is principally important is the possibility to get the ﬂux density up to two to three times more than the Br. Strong exponential dependence makes the system extremely heavy and expensive at the highest felds. Nonetheless, in a wide range of felds – up to 2 T and even more – Halbach-type PM systems can be much more compact and handy than analog electromagnets. To illustrate this fact, Figure 2a and 2b show the Halbach cylinder with a ﬂux density of 1.2 T in a 40mm bore (the overall dimensions are Ø165 × 125mm), and, for comparison, a classic electromagnet that can give approximately the same feld in a 40mm gap.

Figure 2a: The magnetic ﬂux density of the shown Halbach cylinder is 1.2 T in a 40mm bore
Figure 2b: Comparison of the Halbach-cylinder and the electromagnet with similar feld parameters

An additional advantage of the PM system is the possibility of increasing the length of an operating high-feld volume via the system length. Figure 3 shows one of the biggest assemblies produced by AMT&C. Its length is 900mm and its outer diameter is 260mm, with a magnetic ﬂux density in the 20mm bore of 2.7 T. 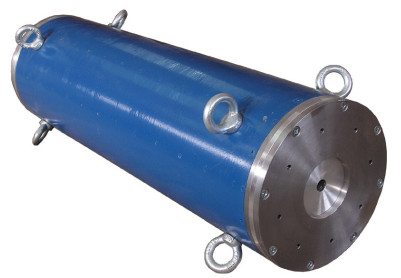 Figure 3: A good example of a high-feld Halbach cylinder with 2.7 Tesla in a bore 20mm

A further step in the development of high-feld PM systems concerns the desire to elaborate a device that not only generates an intense feld, but also allows for the rapid and wide adjustment of the feld. At least two approaches to this problem have been successfully realized. They are both based on the same principle as the dipole Halbach structure. According to the frst approach (Figure 4) the system should consist of two subsystems, each designed as a Halbach cylinder. 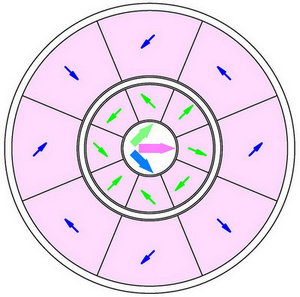 The resulting ﬂux density in the operating region is the vector sum of two felds produced by two subsystems. So, if the subsystems are rotated synchronously in opposite directions the resulting ﬂux density will change and the line of magnetic inductance vector will be constant. One important parameter that determines system quality is the residual feld that occurs in a perpendicular direction, when subsystems are turned opposite each other and the main component of the feld is zero. Moreover, not only is the feld in some central point to be compensated, but also the residual feld in the entire operating region (typically about a few centimeters in size) should be minimized. Given these requirements, the geometric dimensions and grade parameters of magnets of both subsystems are optimized using FEM software. Individual variations of magnets (dimensions, grade, direction of magnetization) also strongly affect compensation quality. Practically, the residual transversal feld can be in the limits of 0.5–1% of the maximal feld. A small transversal feld can be recognized as a disadvantage of the PM system in comparison with an electromagnet system; fortunately, though, in many applications such level of residual feld is not essential. Another problem concerns the mechanical moment that occurs between magnetic cylinders when they are rotated. Analogously to residual feld, this torque can be, to some extent, minimized via numerical modeling. But an essential part of magnetic force is related to deviations of real magnet parameters from the ideal model. So the gear system and the motor should be powerful enough to provide rotation. To better understand the relationship between various characteristics, the system shown in Figure 5 should be considered. 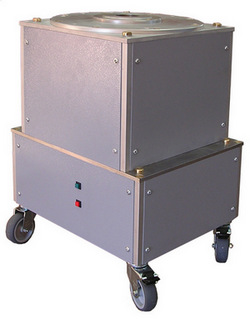 The basic technical data of this system is as follows:
- Bore diameter: 36mm
- Maximal ﬂux density: ~1.9 T
- Total mass: ~100kg, including ~50kg of magnets
- Overall dimensions: – 396 × 324 × 466mm
The bottom part of the casing contains a gear system and step motor with its power supply unit. The maximal power consumption is 400W and step-motor torque is 21Nm. This motor is able to provide a very high feld changing rate – up to 10 Tesla per second. The system is fully computer controlled, so it can operate in various modes: continuous periodical changing at a wide range of frequencies, one or several periods, transition from one value to another with given speed, etc. Figure 6 displays feld changing when the system is turned on in continuous mode. 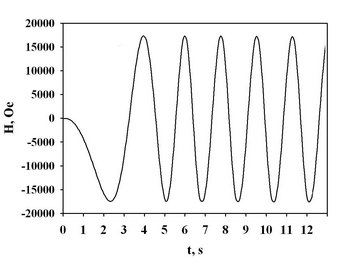 Figure 6: The time graph of feld changing in case of double cylinder design

The high feld changing rate in a PM system, together with the possibility of easily controlling it, is a very interesting and exciting fact. Powerful electromagnets, due to their high inductance, cannot change the current with arbitrary high speed. In fact, the feld changing rate in an electromagnet is no more than ~0.5 – 1 T/sec. Thus, adjustable Halbach-type systems occupy, in this sense, an intermediate position between electromagnets and pulse systems, and, when used as an experimental instrument, create a real opportunity to provide not only static but also dynamic magnetic measurements. An example of this is AMT&C using these PM systems as a basic part of automated setups for direct measurement of the magnetocaloric effect.

Another type of adjustable magnetic feld source, consisting of an even number of magnetic rods, is presented in Figure 7. 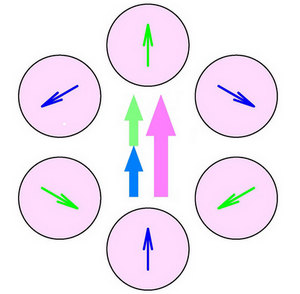 Figure 7: An adjustable PM system is outlined with the scheme with rotating rods

Here, analogously to the previous scheme, there are two subsystems. Rods in each subsystem are arranged according to the principle of the Halbach cylinder. But unlike the previous design, the subsystems do not rotate as a whole. The same result – rotation of the feld vector in the operating region – can be reached via rotation of each system element synchronously in one direction. Hence, if the green rods are rotated clockwise and the blue rods are rotated counterclockwise, and the result will be modulation of the total feld. The obvious convenience of this type of adjustable system is that all constituent magnets have an equal and simple shape. However, there are also two serious disadvantages. First, geometric restrictions limit the achievable feld – it may be no more than ~1 T. Second, the torque, related to a magnetic interaction between rods, is, in this case, signifcantly more than in the double cylinder system. As a result, all systems of this type that have been realized to date have gear boxes with a low transmission coeffcient, and can provide only a relatively low feld changing rate. As an example of realization, the system in Figure 8 can be considered. 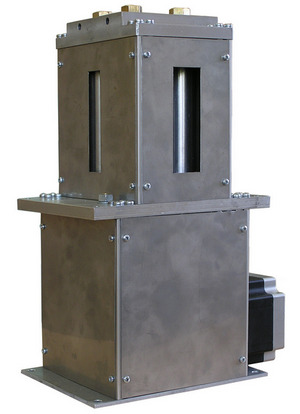 This system was designed for magneto-optical experiments and was to have, in addition to the vertical bore for inserting the sample under study, windows in directions along and perpendicular to the feld. For this reason, the scheme with four rods, which has a required symmetry, was chosen. The resulting parameters are:
- Overall dimensions: 198 × 285 × 450mm
- Bore diameter: 42mm
- Maximal ﬂux density: 0.7 T
- Total mass: 45kg
- Windows width: 17mm
In conclusion, PM systems can generate a high feld and provide very high dynamics, opening up more and more opportunities for applications of PM devices in laboratories and industry.

Published in AMT&C articles
Tweet
More in this category: Measurements of the Magnetic and Magnetothermal Properties of Heavy Rare Earths »
back to top

Production, related to this article: 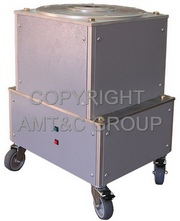 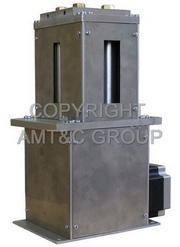